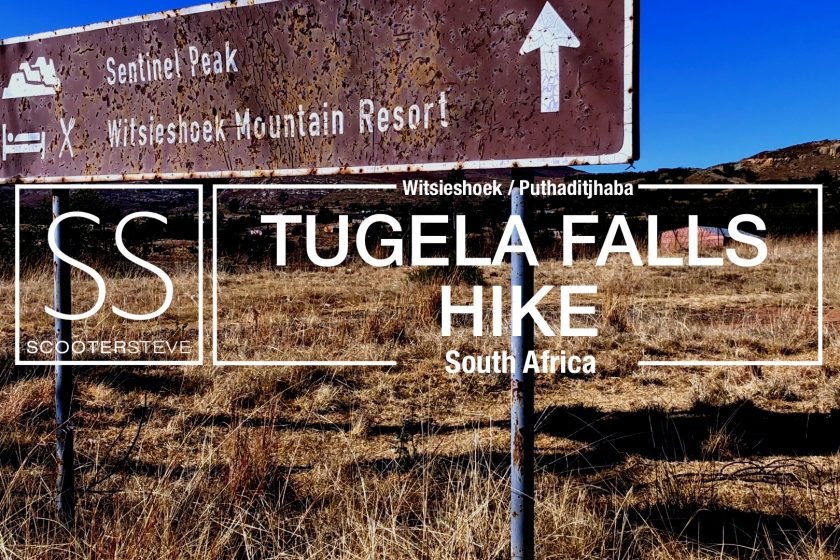 These chains had me trembling!   With adrenalin pumping I was not going to let 30m stand between me and the Tugela.  “Don’t look down, hang on tight!”  I repeated this phrase 60 times as I made each step up the cold metal ladder.

I love hiking.  It’s a combination of the silence and the physical challenge.  I like any activity that gets me away from the noise of humanity.  And hiking not only does that, it also offers a chance for self-reflection, amazing views and vitality points (If you wear a garmin!)

When I mention to visitors that South Africa is a high altitude country they are surprised.  Apart from a narrow coastal area, the majority of the country sits on a 2000m high central plateau , flanked by an escarpment.  That’s a fancy word for a mountain range.  The highest point in South Africa is Mafadi at 3450m.  Located in the Puthaditjhaba region north of Lesotho, it’s great for mountaineers. Not so great for sportsmen!

Fact: The highest point in southern Africa is in Lesotho.  Thabana Ntlenyana peaks at 3482m

The idea of walking close to the highest part of South Africa has tickled me for some time. With a break in the weather in early July, my wife and I high-tailed it at dawn from Johannesburg to Witsieshoek Mountain Lodge for our summit attempt.

Witsieshoek is a 4-hours drive from Johannesburg. 60km west of Harrismith the drive took me through the semi-rural area of the Free State. Formerly known as Qwa-Qwa, the locals have anti-freeze for blood. It’s cold!  Sitting high in the clouds, the villages flanking the road bellow smoke from their chimneys. The only thing more ubiquitous than goats are funeral parlors and bottle stores.  I left the rural community behind as I travelled up a steep track toward Witsieshoek lodge (and a peak called the Sentinel)

Cost:  R50 per day per person to enter Witsieshoek Lodge, and another R80 hiking fee to be paid at the Sentinel car park prior to the hike.

The road up until the mountain lodge is paved, there after it’s 4×4 ONLY.   The R80 fee is being put to good use.  There are some sections of the 7km track that are being paved and maintained.  I imagine in a year or two it will be completed.

If you’re not the walking type the view from the car park is worth the trip alone. But I was on a mission to walk on top of South Africa, and as fate would have it, also see the 2nd highest waterfall in the world. The Tugela (Thukela) Falls would be my reward.  The walk is advertised as being 3 hours up. Google politely informed me that it would only take 1 hour and 14 minutes. What google forgets is that you have to haul your fat-ass up 500 vertical meters. 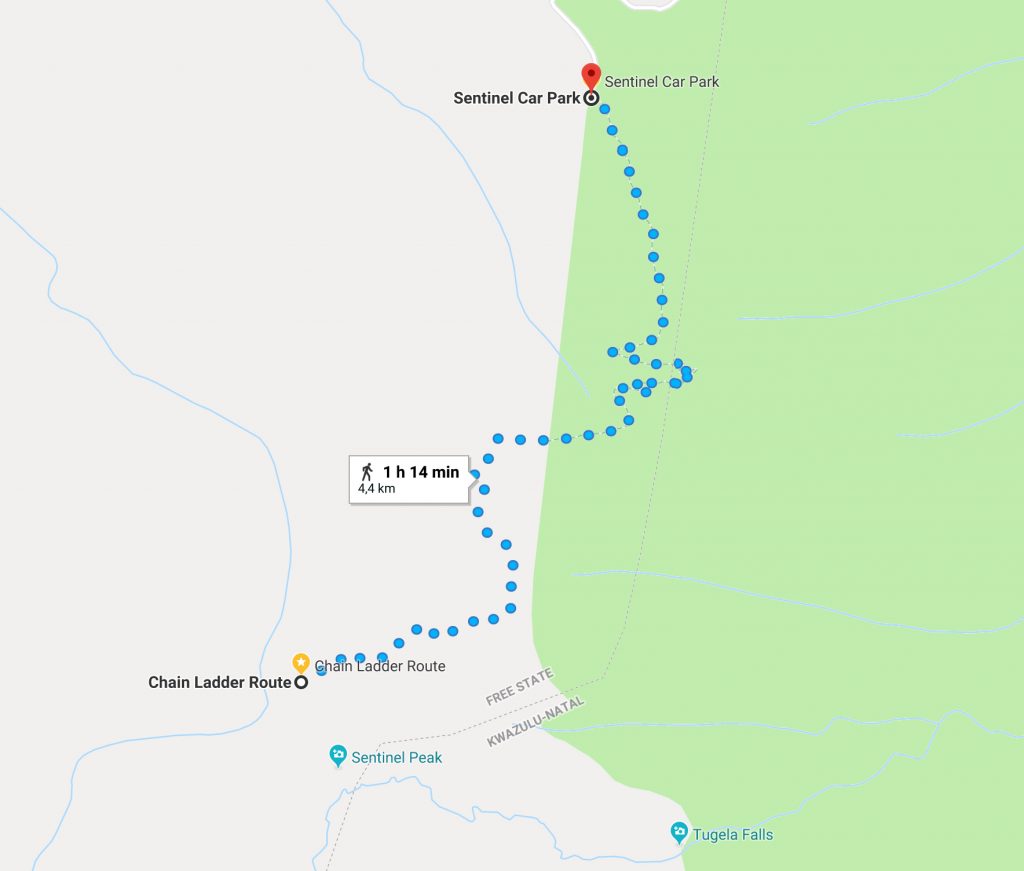 The paved-trail from the car park makes a zig-zag up until the base of the Sentinel.  This is for people with big lungs. Starting at 2500m the air is rarified and I had to pace my walk to keep the heart rate down.

The first 2km are grueling, thereafter the track traverses gently across 2 valleys for another 2,4 km.

Things get interesting at the 4,4km mark.  Either I would have to overcome my fear of heights and climb 30 vertical meters up a deathly looking chain-ladder, or accept defeat!

The notice board at the car park eluded to an alternative route, but that was not an option I wanted to make.  I am a risk taker and seldom get nervous shakes when it comes to physical challenges.  These chains had me trembling!   With adrenalin pumping I was not going to let 30m stand between me and the Tugela.  “Don’t look down, hang on tight!”  I repeated this phrase 60 times as I made each step up the cold metal ladder. I must admit that after the climb my fingers where fatigued.  I guess I have found my nemesis.  Metal and chains!!! 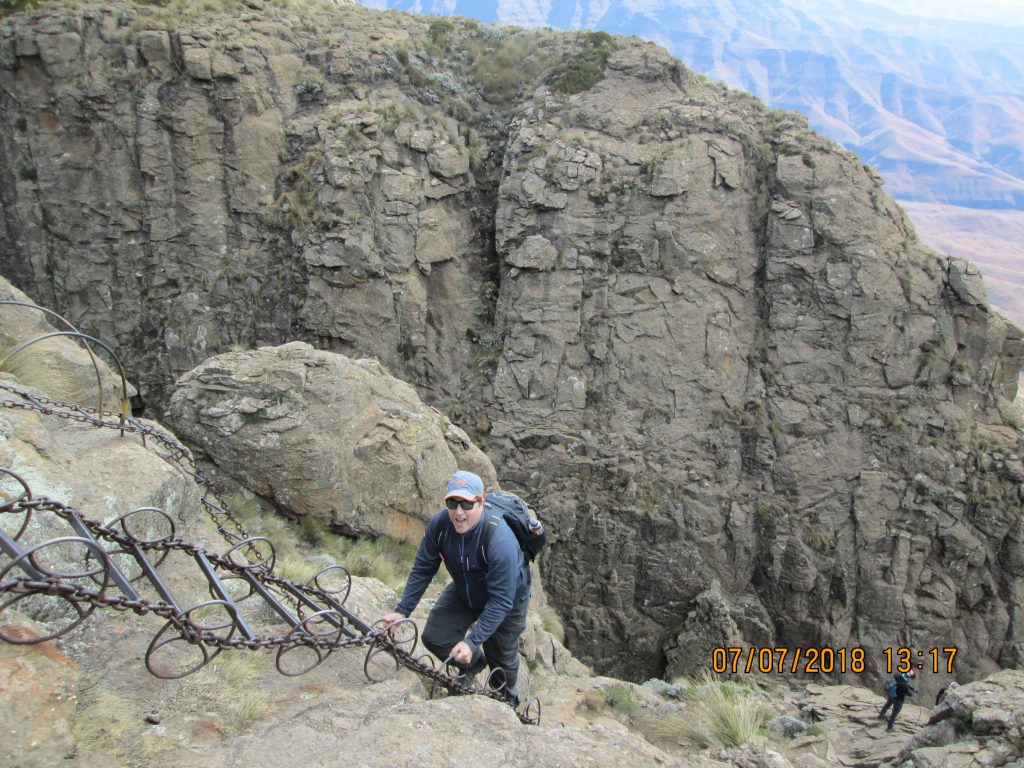 From the top of the chain-ladder climb the walk to the edge of the world began.  Thankfully the wind was still, but the temperature was sub-zero.  The surrounding plateau is the catchment area for the mighty Tugela river.  Dozens of frozen streams and eroded crevasses meander their way to a single exit point. The Tugela Falls. 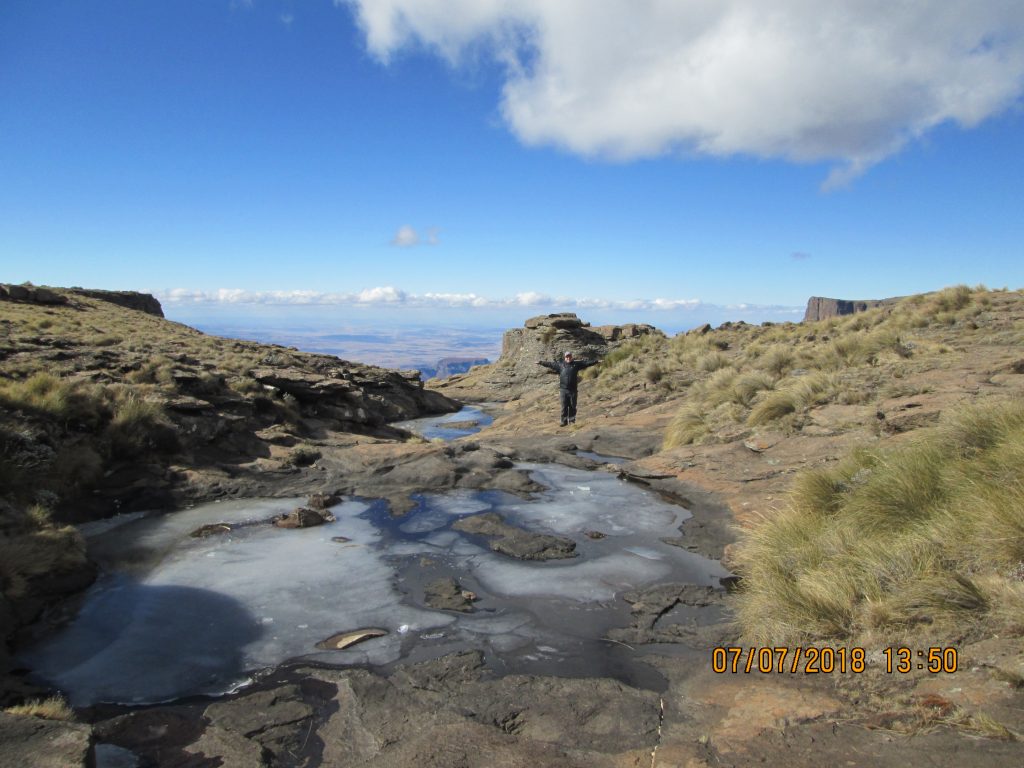 Admittedly the Tugela falls was non-operational.  Something to do with the municipality cutting off the water pressure I think!  I can only imagine what it looks like in the rainy season when the valley below is green.  But I’ll take the consolation prize – THE VIEW! 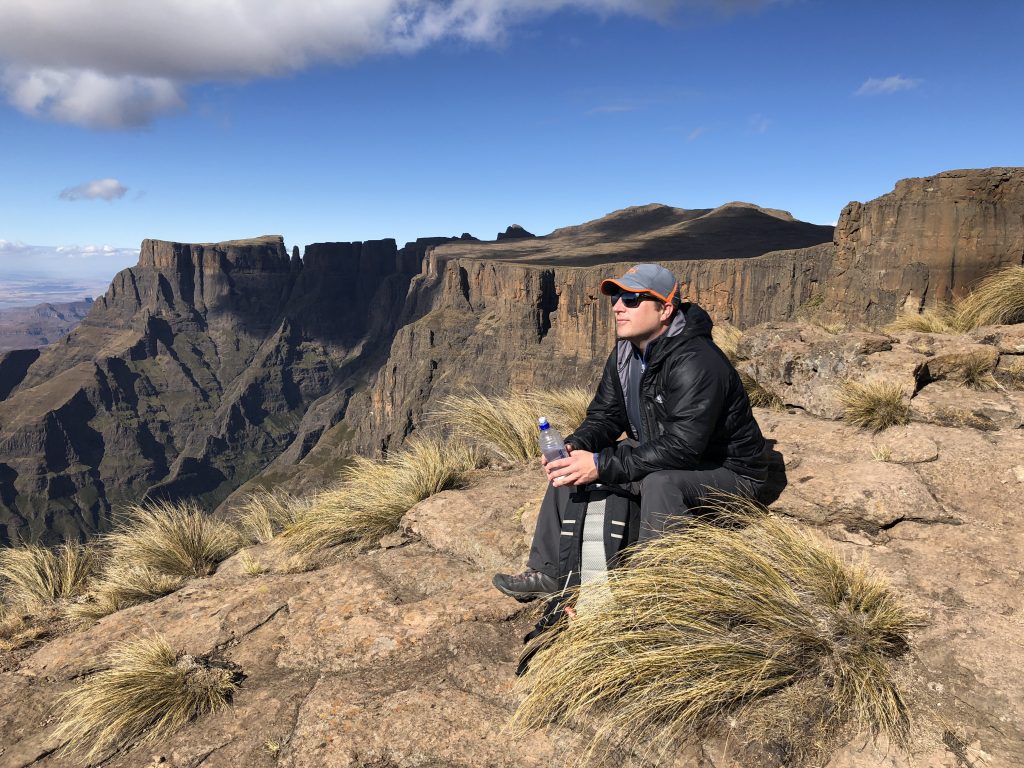 Sitting at around 3100m above sea-level, this is the highest I am ever likely to get above South Africa. A pause for thought, and the unsettling knowledge that what goes up must come down.  Those bloody chain-ladders in reverse! 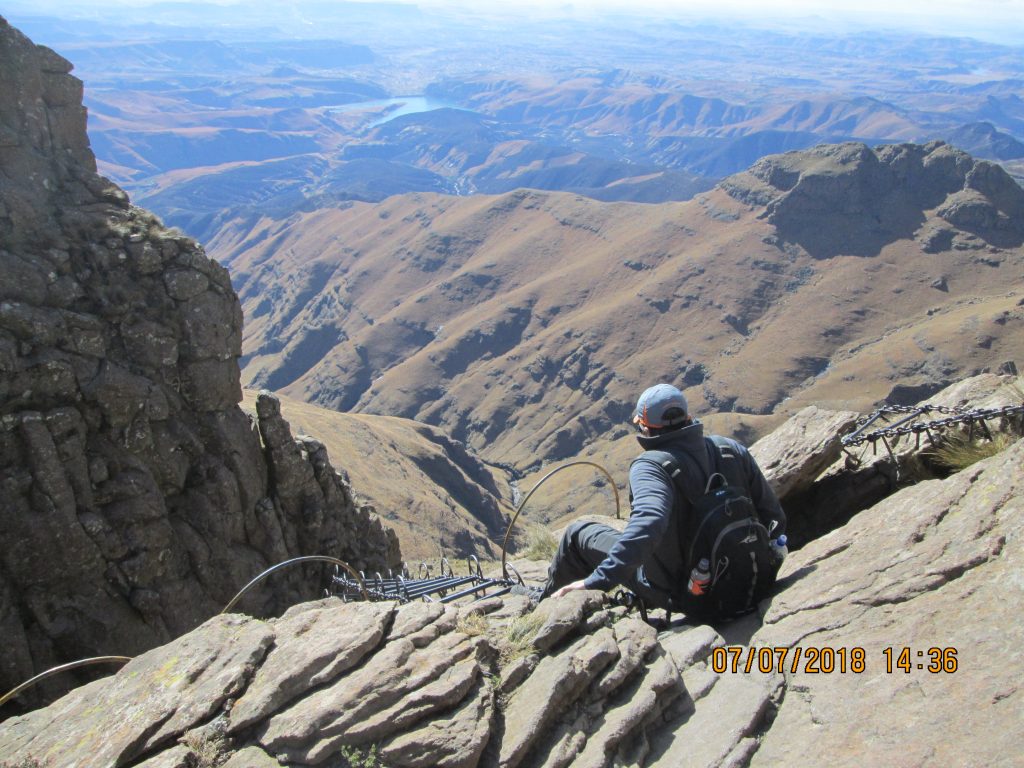 The walk up took me 2 hours and 40 minutes.  The walk down, a leisurely 2 hours 5 minutes.

Time management:  Assume the walk will take 6 hours and have a fixed turn-around time. Sunset in July is around 5pm, so wherever you are at 2pm, turn around.