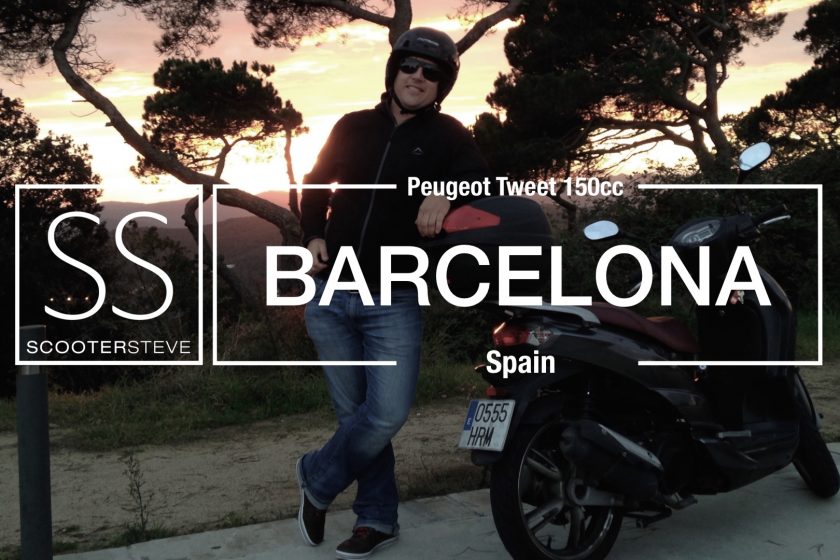 Make no mistake. Scooting is dangerous.  By day there is traffic and at night it’s dark.  There is one exception. At full moon I ride.  It provides the best of both worlds. Clear streets and well lit roads. 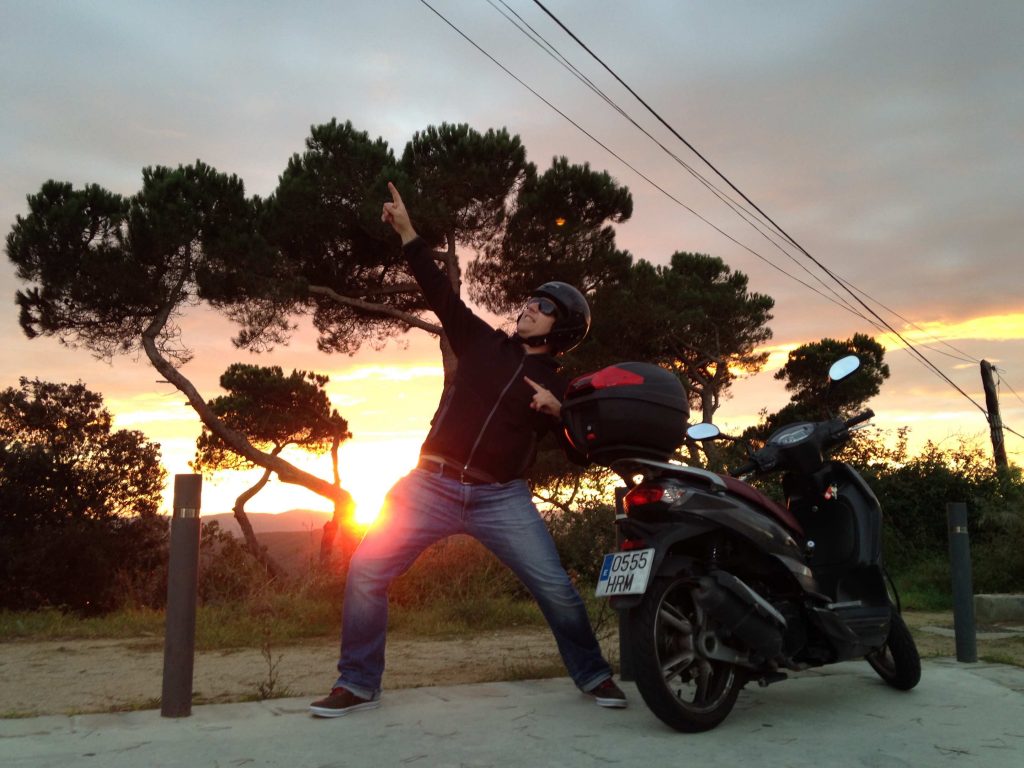 We know how well Spain did in this years European Cup? Chasing ghouls and full moons in Barcelona needed some French va va voom! A Peugeot Tweet 125cc.
Our midnight blat began at sunset.  A chilly cruise up a brilliant meandering road called Carretera de Sant Cugat. (route BP 1417)
The Tweet hauled its 2 passengers with gusto to the the highest lookout over Barcelona – Tibidabo. At 512m above the city you won’t get a better vantage point. 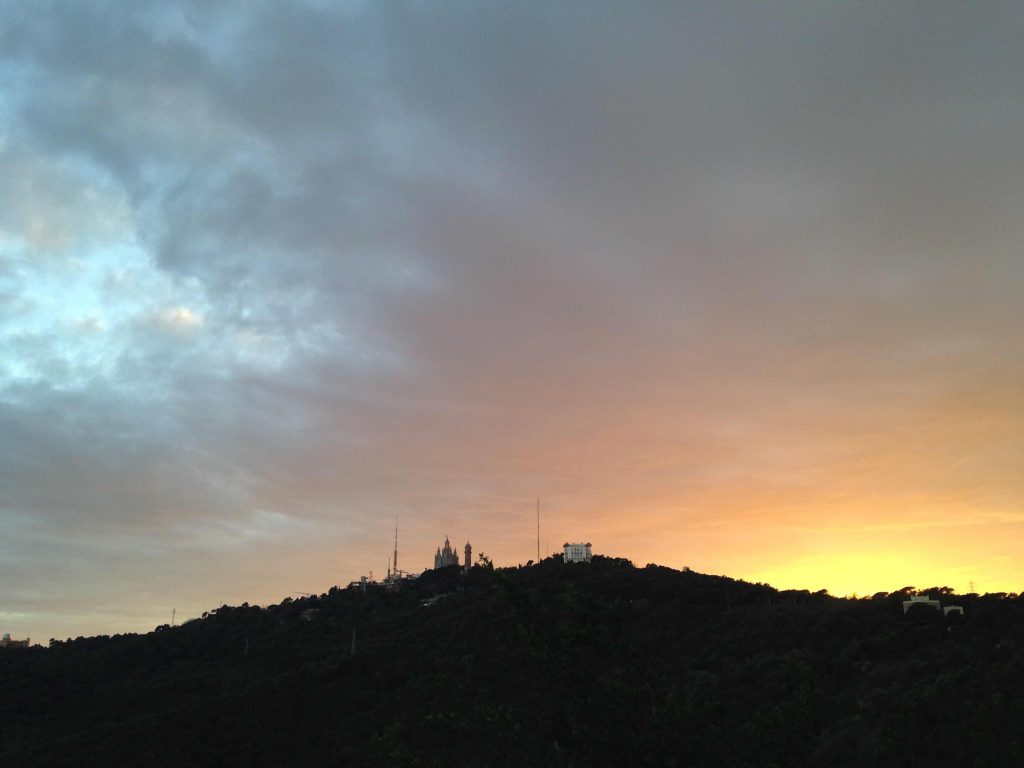 An epic sunset to the west was quickly replaced with an air of apocalyptic nothingness.  Tibidabo was deserted this time of night.  The oldest theme park in Spain lacked the laughter of children and happy families.  The full moon rising cast its ominous shadow over the Temple of the Sacred Heart. If tonight was a Hollywood movie the comedy was turning into a horror. 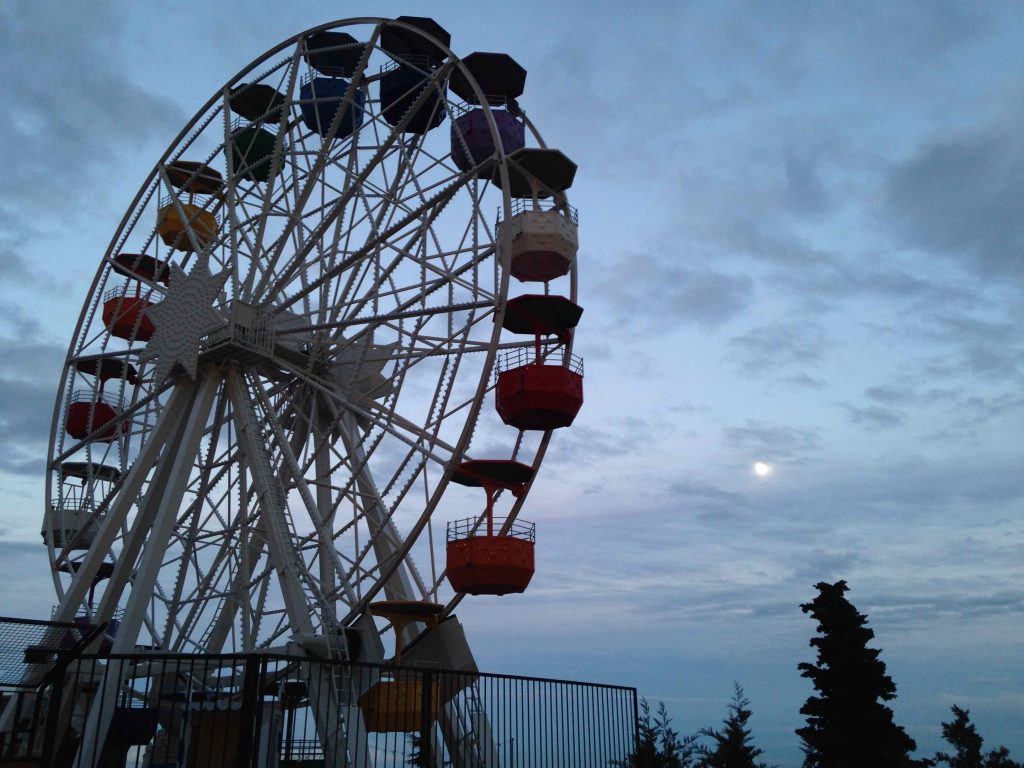 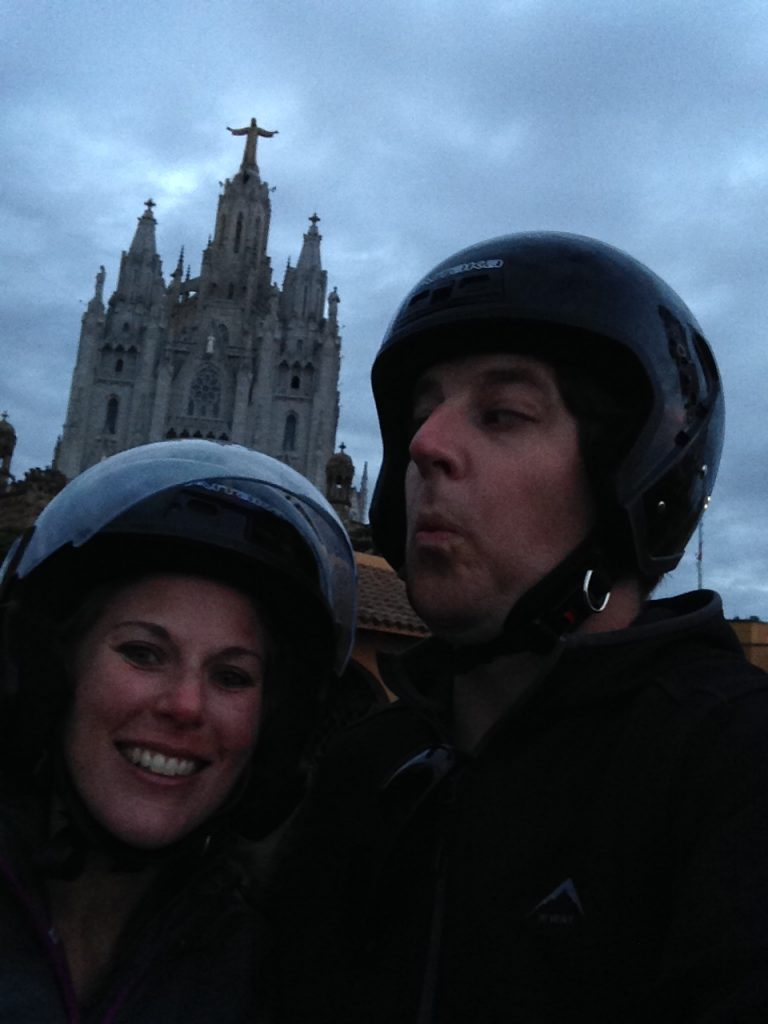 Barcelona should be called Gaudiville. This city is a living memorial to prolific artist and architect Antoni Gaudi. You name it he made it. The Sagrada Familia, Parc Guell & Casa Batllo. The list is long. Atop Tibidabo the cranes of construction showed us where to go next. Far in the distance the spires of The Sagrada Familia beckoned us down. 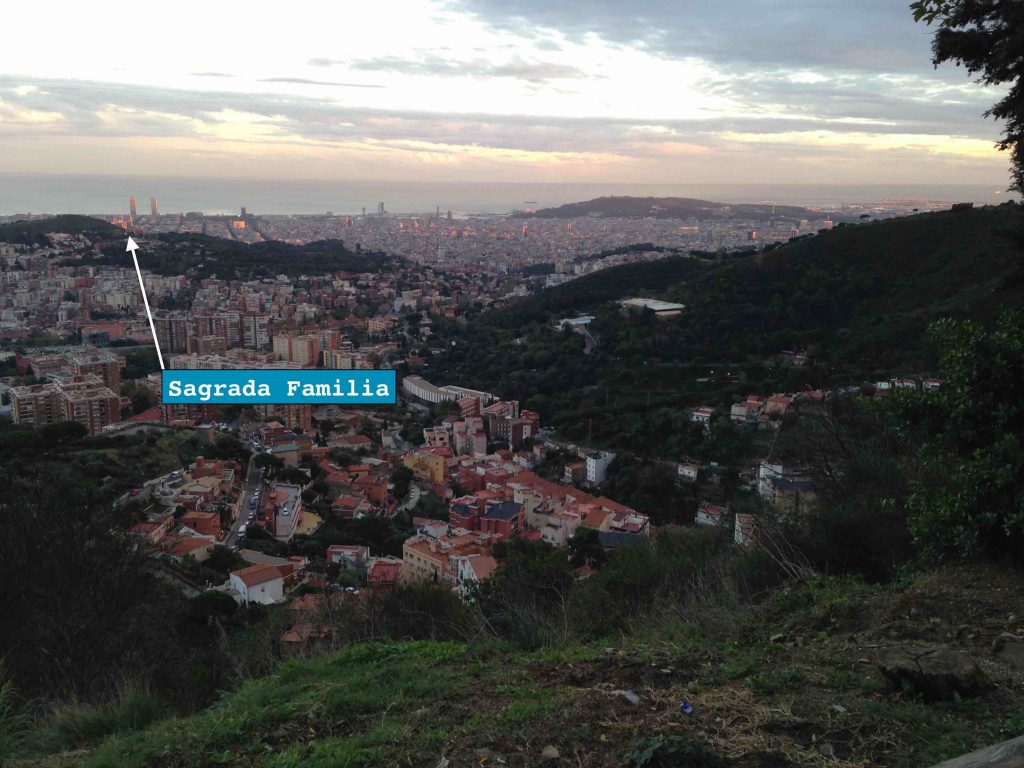 Construction began in 1882. Only 8 of the 18 spires have been completed.  A work in progress the projected completion date is 2026.  I repeat, “2026!” I shan’t comment on Spanish efficiency. Let’s just say a Civil War, 2 World Wars and the death of the architect have been sited for delays!!! 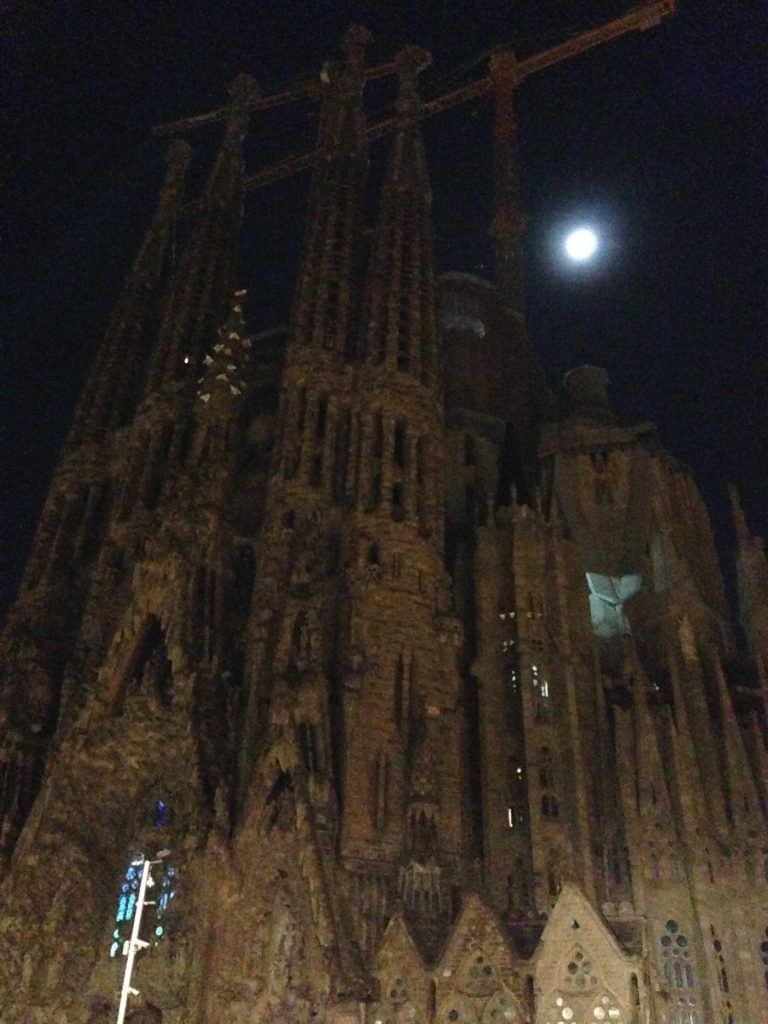 The ride to the Sagrada was frustrating.  When I collected the scooter that afternoon I knew this was not a scooter friendly city.  You need to know your way around to truly get the most out of commuting in Barcelona.  For a scoo-tourist it’s a headache. Riding is staccato. You never flow. The roads are a one-way mess, the traffic lights out of sync.  Huge center islands along the major boulevards prevent turning into the alleys.

Would I recommend scooting in Barcelona? No. But try it for the experience and the epic cruise up Tibidabo.  Thereafter save your cash and patience and use the excellent Metro system.

Where was I? The Sagrada Familia. The midnight run was 5 hours in.  The moon was shining bright and the tapas crowd had had their wine. The streets were ALL mine. 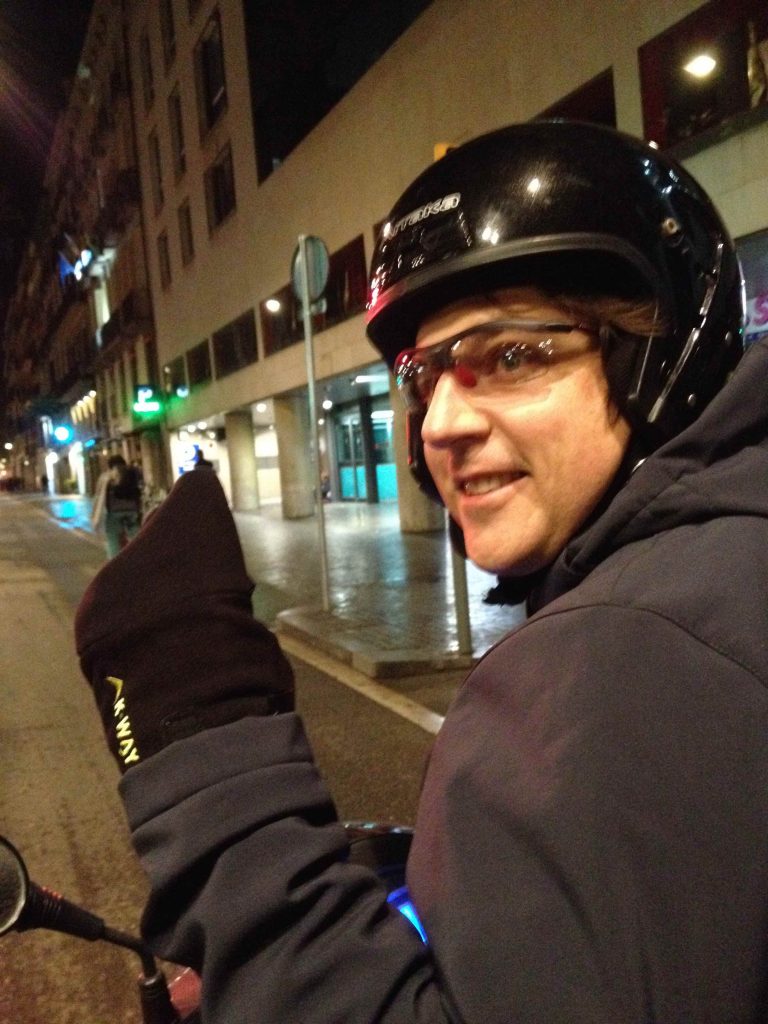 The air was icy. “Lets go to the beach?”  Shit idea!  A 5km cruise down Av. Diagonal to Av. Del Litoral and along the beach.  There was not much to see.  I’ll make a note to come back in summer. The main shopping road in Barcelona would be our last run and gun before calling it a night.

Starting at the Columbus Monument (Mirador da Colom) the cobbled pedestrian walkway of La Rambla was littered with drunks. My kind of people.  I would have to take a rain cheque on that glass of Rioja. Drinking and scooting don’t mix well. 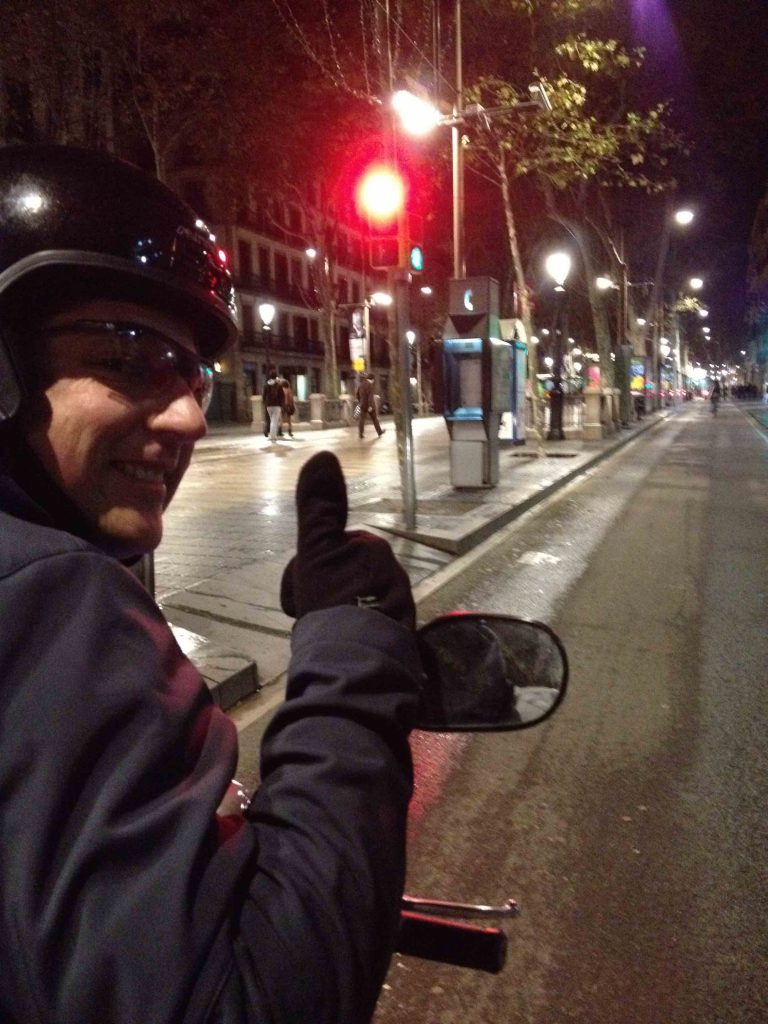 La Rambla becomes Passage De Garcia, the Barcelona equivalent of Knightsbridge.  The address to shop and stay.  If there is one place you must visit other than The Sagrada it has to be Casa Batllo (pronounced Bat-yoh!). The most ridiculously imaginative mansion on Passage de Garcia. 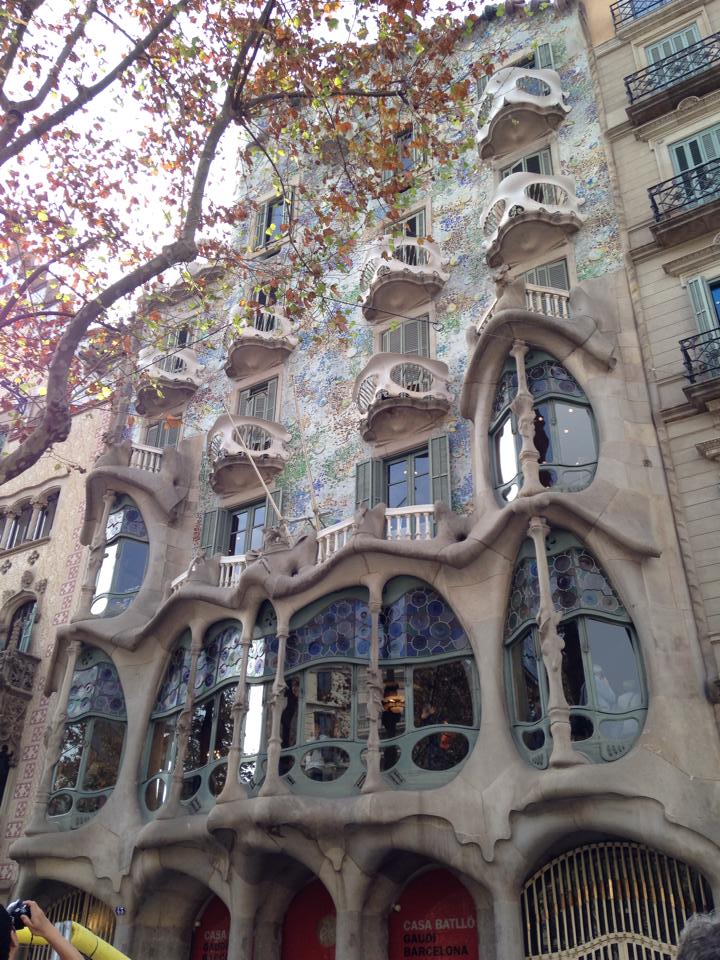 Also known as the House of Bones it was built in 1904 for textile millionaire Josep Batlló I Casanovas by Gaudi.  Lucky bastard!

Learn more about Gaudi on artsy

I am not a museum, monument, art gallery kinda guy. I have ADHD and get bored. But Casa Battlo is different. It made me realize that 20th century design has been a downhill disappointment compared to the Catalonian creativity of the era.  It will blow you mind.

Tip: Skip the queues & book ahead for tickets online

The Peugeot tweet was firing on all 4’s!  Its 8,5HP 125 cc engine is plenty powerful owing to the low mass of the bike (only 106kg’s, excluding ScooterSteve & Wife!).  It turns on a peso and because of the larger 16” wheels the ride is smooth. And it has foot pegs for the pillion. Ole!It’s not an entry level, budget scooter – I would go out on a limb to say that for half the price of a Piaggio Vespa it’s a close rival in terms of ride feel.  Visually though the Vespa is hard to beat. Dam those Italians! 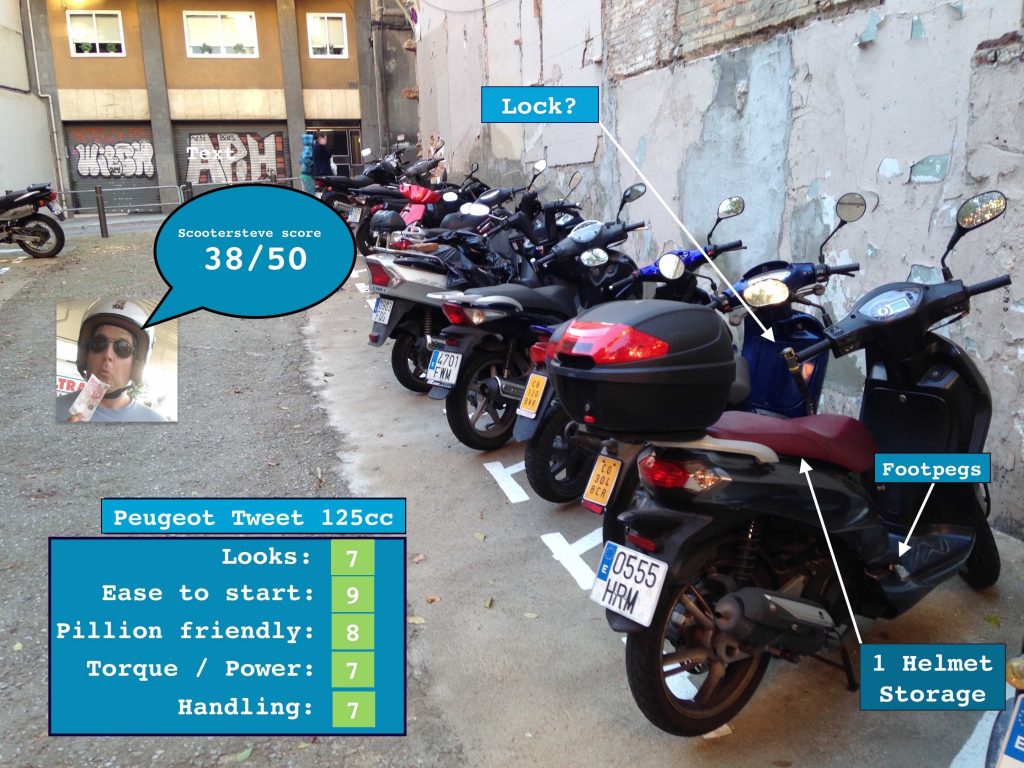 8 hours had passed since sunset.  We were tired and hands were numb.  Barcelona had one last treat in store for us. By South African standards wine in Europe is expensive. Fair labour practices! But it’s good to know that in Spain a bottle of reasonable red wine is on par with prices back home. Salut.
In bed by 3am. Not bad for an old git in his late 30’s! 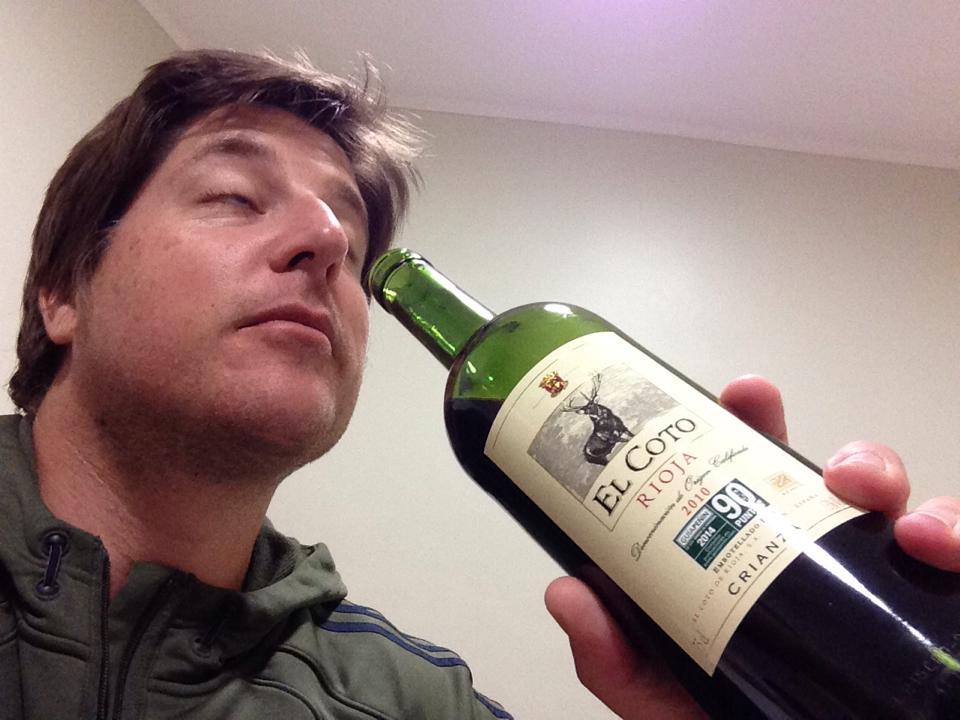